75 Ball Bingo is one of many variations that we discussed in the how to play online bingo section but we will go further in detail.

We are going to discuss how to play the 75 variations and what the best rooms online to play for real money. 75 Ball Bingo is the most popular variations for USA residents that play real money games online. Below is a list of the best USA online bingo rooms.

Cyber Bingo is an instant play website that also offers USA residents that play for real money the option to download the software to their desktop or laptop. They have great graphics and are consistently improving their gameplay, tournaments, and customer service.
Read Review
Play Now
2

This variation has become very popular over the past twenty years since the beginning of the Internet. This variation was the most popular at land halls during the 1940’s in The United States of America.

How To Play 75 Ball Bingo Online For Cash

When you begin to play the 75 Ball variations, you will see the card with a grid that has five numbers up and down. Just like in a land game, the word B-I-N-G-O is on the top of every card you get.

Americans that play the lottery for real money online will notice a free space directly under the letter N. The N column only consists of four numbers because of the blank space we spoke about, and the numbers range from thirty-one through forty-five.

Lastly, The column for the letter O has five numbers that range from sixty-one through seventy-five. Feel free to read the 75 ball-bingo rules section.

OnlineBlingo.com wants to discuss a few rules that players should be cognizant.

Some of them are fundamental. However, we still would like to cover them. Like the title of the game suggests, there is a total of seventy-five balls rotated in a cage of a container.

In most online rooms and halls, the balls are usually different colors. They are made up of 5 different colors for each ball to make up a letter for B-I-N-G-O. A random number generator (RNG) used, and the caller in the room draws balls at random. Once the numbers call out the real money player uses their dauber or mouse to cross out the numbers that the caller mentioned.

How do you win real money playing the 75 ball variation? Anyone, including residents of The United States of America and The United Kingdom, has to complete a pattern that is pre-determined by crossing off the numbers on their card, which creates the pattern. Last updated May 17, 2017. 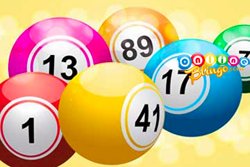