We thought that it wouldn’t happen, which turned out wrong. The final US election campaign presidential debate for this 2020 transpired on October 21, 2020. US President Donald Trump, along with Joe Biden, his democratic challenger, underwent a heated face-off throughout this debate.

Recalling their first debate, surpassing the chaos that occurred back then seems unlikely. Donald Trump interrupted Biden numerous times throughout their past debate session, which makes their encounter more like a brawl than a political discussion. The debate that took place on October 21st is an interesting exchange indeed. Each candidate was allowed to mute the microphone of the other during their turn, making things much less chaotic.

Aside from the stage presence that these two produces, there are several questions that most of us seek answers to – Will Trump be required of an explanation regarding his bank account in China? Will Biden reveal his position regarding Supreme-Court packing or get a question about his son’s controversial Ukraine dealing? Last but not least, will the fly on Mike Pence’s head during the previous vice-presidential debate make a second appearance?

If you and your friends haven’t watched the presidential debate between Trump and Biden that occurred on October 21st yet, don’t miss out on the opportunity to make things much more entertaining – with debate bingo cards. GZERO Media released a new batch consisting of four debate bingo cards. Each card is different from the others for all players to have varying boards at Canadian bingo halls.

The only thing you need to do is to print these cards, preferably on medium-thick paper material. Traditional bingo cards usually come in a 5×7 inches size. If you want to make the bingo experience as realistic as possible, you have the option of following this measurement. Nevertheless, this part of this activity is not necessarily required. As long as everything’s easy to read, you’re good to go.

Depending on the number of friends you plan to play with, you may need to print more than four bingo cards. Making things work for friend groups that consist of more than four individuals is still possible. You can divide yourselves into four groups, or you can consider having multiple winners. Making tweaks such as these could make the experience even more enjoyable. Once you have printed all the cards you need, the only tasks left to do is to cut each one of them out and prepare some marking tools to cross things out later on.

Buy Cards Ahead Of Time

Every time one of the two debate candidates says any of the words or terms present on your card, you will cross them out. The first player to get five cross symbols across his/her board wins the debate bingo. For those who want to spice things up, some great alternatives to crossing things out would be to do burpees, to take a gulp of your chosen drink, to donate to your favorite political candidate/charity, and more. The possibilities are endless. Regardless of your preferred game rules, this debate bingo cards by GZERO media would surely make things much more fun. 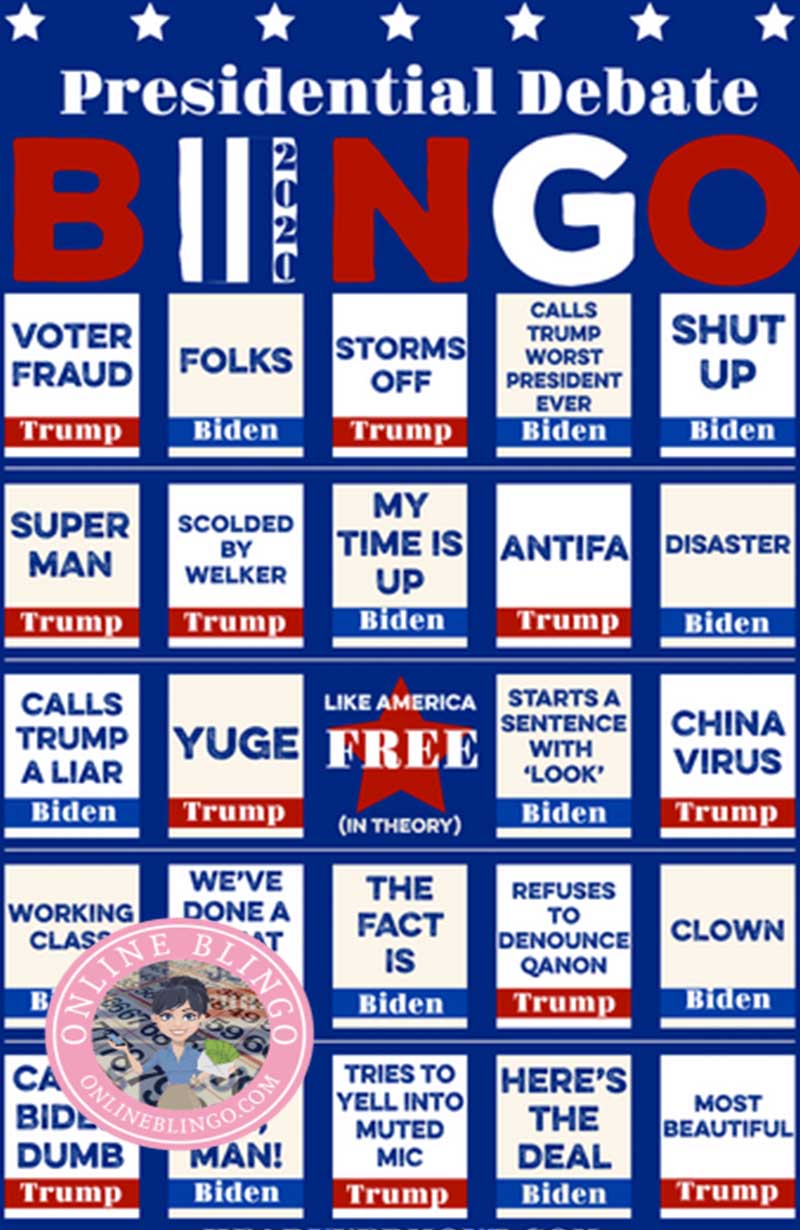